Animals you can still spot during your winter hike 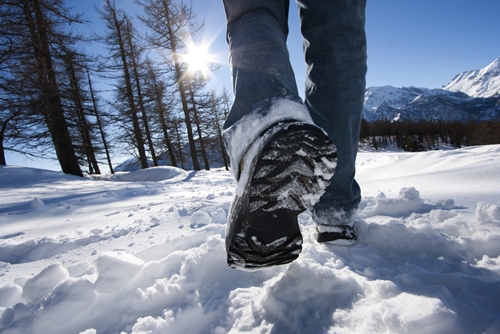 When winter settles in over North America, many animals either head south for the duration or settle in for a few cozy months of hibernation. During your hiking trip, fresh snow seems to amplify the hauntingly quiet hush that fills the forest. That is, however, only until a family of deer runs across the trail or a snowy owl flutters overhead.

While it's true many animals beat the cold by sleeping or otherwise fleeing, there are plenty of creatures that tough it out in the ice and snow. Here are some creatures that you can see during the coldest months of the year.

Deer
White-tailed deer are among North America's most abundant animals, and they do what they can do to make it through the winter. In fact, according to the Pennsylvania Game Commission, survival rates are incredibly high, even through the coldest stretches. A thick coat covered in protective oil traps heat, and a thick layer of fat keeps the deer comfortable in freezing conditions. White-tailed deer will slow their activity to further beat out the elements.

The largest member of the deer family, the moose, thrives when the temperature plummets. These massive animals can sustain themselves on pine needles and bark if necessary and they too have the size and coat to avoid getting chilled. Because moose and other species of deer lose their antlers in the winter, it can be hard to tell apart males and females. As always, it's best to enjoy these animals from afar.

Bald eagles
When you check your Pro Trek PRW3510Y-1 watch with thermometer to see how cold it is, you could look up only to see a bald eagle overhead. These massive birds of prey may migrate to the U.S. during the winter to escape the colds of Canada, while in many states the animals stay put year-round. They look for unfrozen lakes and ponds to fish and hunt, and their feathers can protect them from the snow.

As the website Bird Watching reported, the Mississippi River in particular is a haven for thousands of bald eagles each year. The flow of water usually protects against any freezing, and human developments like dams can trap fish. As a result, bald eagles have consistent hunting even in the cold of winter.

Lynx
Though many smaller animals opt to hibernate during the winter, rabbits are often active even in the snow. This gives the lynx plenty of prey to sustain itself through the cold months. Bobcats and other species of lynx are found throughout the U.S. and Canada and are specially designed for frigid temperatures.

It's believed their characteristic short tails are an adaptation to protect against frostbite. Likewise, their round faces and tall ears funnel sound, making it possible to listen for small creatures moving in the snow. Patience and a keen eye are needed to spot these elusive predators during a hiking trek, however. Foxes and coyotes may also be active during the winter, preying on whatever animals are around.