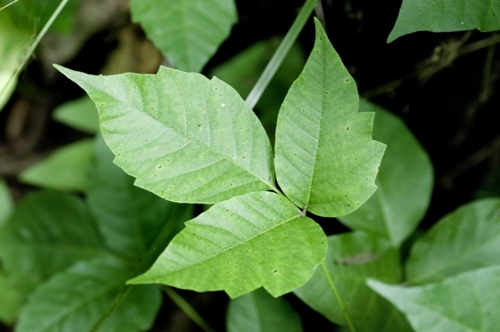 There's much more than poison ivy out there in the wilderness, and some well-known allergens can cause more than a sniffle and a sneeze. When you're out hitting the trail, keep to the paths and avoid these irritants. Using your watch compass and a map to explore uncharted areas can be great fun, but not if these plants are standing in your way.

1. Poison ivy
"Leaves of three, let them be" - that's the old Boy Scout expression that will take a hiker far. According to the U.S. Centers for Disease Control and Prevention, at least one type of poison ivy - the Western strain or the Eastern strain - is in every one of the adjoining 48 states. You're likely no stranger to a poison ivy rash. The oily surface of the three leaflets can cause skin to swell, grow red and blister. Avoid it if you can or soak in an oatmeal bath or apply calamine lotion if you get this rash.

2. Poison oak
Like poison ivy, poison oak has a similar appearance with leaves of three, but it's contained to fewer regions. It's mostly found in the Southeast or on the West Coast primarily, according to the CDC. It can grow in vines and have yellow and green flowers and berries. It causes a similar rash to poison ivy, too.

3. Poison sumac
Poison sumac, on the other hand, isn't composed of leaves of three. Instead, the plant contains branches of 7 to 13 leaves. It's primarily found along the Mississippi river and in marshlands in the Southeast, but it may be found well into the North Western areas of New England and along the East Coast.

The CDC noted that while "leaves of three" may be a decent rule of thumb, it doesn't cover all variations of these plants. Both poison oak and ivy as well as poison sumac are found in different varieties depending on the region they're found in. It's wise to identify what the plants look like in your area and avoid them accordingly.

4. Ragweed
Most are familiar with ragweed. The plant blooms and spreads its pollen in the fall, wreaking havoc on sinuses and serving as a primary cause of hay fever, according to Mayo Clinic. What some do not know is that those with a sensitivity to ragweed may also break out in a rash after touching the plant, too. It can cause the skin to redden and develop small bumps and blisters that itch.

Like the other irritating plants, the rash is best treated with anti-itch substances that comfort and soothe the skin. The rash will dissipate naturally over the course of three weeks, but it may be wise to consult a doctor or dermatologist if it does not clear up in that amount of time.

5. Wild Parsnip
You've likely seen this plant before. It's composed of large, broad yellow and white flowers on a thick stem. Wild Parsnip normally does not cause a rash simply by brushing against hikers. What does cause a reaction is when travelers get the plant's sap on their skin. The sap causes redness and blisters in marks that look similar to burns. According to Mayo Clinic, the discoloration caused by wild parsnip burns can last for months or even years regardless of treatment. Blisters from the plant may also last for several weeks.

The best remedy for poisonous plant rashes is by steering clear from them to begin with. Wear long sleeves and pants if you plan to hike an area with many of these plants, and carefully take off these clothes and wash them immediately following the trip.

The PRG300CM-3 is a great watch to help keep you on the trail. Its sleek case and soft band make for a better fit and comfort. When taking a day in the outdoors you always want to be knowledgeable of the environment and comfortable.