Get to know these common freshwater fish 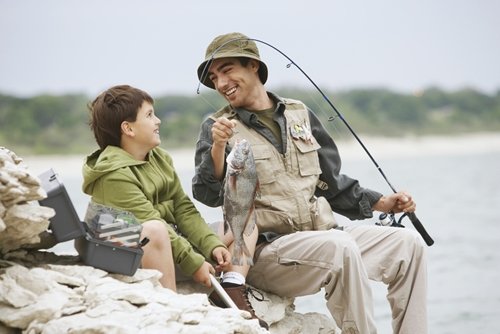 Casting a line and sitting back in the fading light of a setting sun is a summertime experience unlike any other. Across the country, fishing is one of the best ways to enjoy the great outdoors this summer. Whether you're hoping to snag yourself a delicious meal or plan on releasing your haul, knowing what to expect is important for maximizing your odds.

Take along the Pro Trek PRG270B-3 watch with triple sensor technology and compass to make sure you know exactly where you're going, and see if you can catch one of these common freshwater fish.

Bass
The World Fishing Network reported that bass are the most popular gamefish in North America for a number of reasons. First off, through human introduction, these fish can be found across the continent. Secondly, however, they are often easier to catch than other species of fish.

In the heat of the day, these fish will likely hide in the shallows under docks and the natural shelter of fallen branches. Be careful when fishing in these areas, as it can be easy to have your line get caught. Bass can be identified by their big mouths and fat bodies.

Trout
There are several species of trout, which can be found in lakes and ponds as well as streams and rivers. They are distinguished by a long body and square-shaped tail. They normally have muted coloration, but the Wisconsin Department of Natural Resources found that the males will exhibit brighter colors during spawning.

Trout may grow to around 10 pounds and can be almost two feet in length. They feed on insects, crustaceans and small fish, and prefer cooler water. When you pick up your fishing license, ask the clerk for tips on specific lures. Some farm-raised trout have different inclinations and behaviors than native varieties.

Perch
This hardy species is known for its impressive coloring, and is a mainstay among folks that enjoy ice fishing, although it can be caught year-round. These fish have a brass or yellow body and are often speckled or striped, according to Fishing Tips Depot. They are most active during the early morning or evening.

The source stated that unlike many freshwater species, perch are most attracted to live bait. Crayfish, minnows and night crawlers can all be effective for catching perch. Because perch tend to school, once you've caught one, drop your line quickly. Otherwise, the school may swim away and force you to change locations.

Pike
Unlike other species of freshwater fish, pike can be a little dangerous. They have needle sharp teeth and are more aggressive predators than other species. Field and Stream stated that their serpentine bodies and outer, slimy coating make landing pike even more difficult.

Northern pike, one of the most common varieties in the U.S. are most active during the middle of spring. They are hungry and agitated after laying dormant for the winter, and as ambush predators, they will leap from their hiding spots in shallow weeds or vegetation and give a spirited bite to your hook.

Catfish
Though these fish have a reputation for being bottom dwellers, the truth is that catfish are much more active than they get credit for. There is also a myth that catfish respond best to a stinky bait, but in reality they will chase most typical live or artificial lures. These fish have superb hearing and sensory skills, making them adept predators in dark or murky water.

Smaller catfish have spines on the side of their bodies that can be dangerous, and although there is no venom, it can produce a burning sensation. This is not cause for alarm, though it can be quite painful.