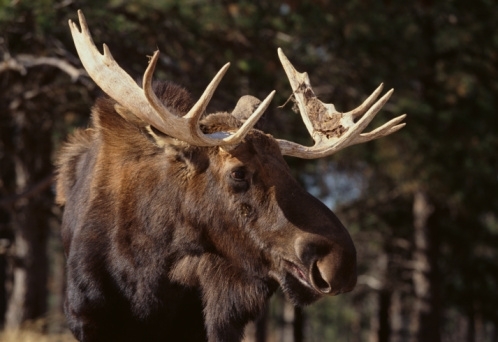 North America is home to a number of unique and exciting animals, some of which are both immensely beautiful and downright dangerous. Hikers and outdoor enthusiasts would be wise to give these animals the space and respect they deserve in any event, but nonetheless, an encounter with any of North America's majestic mega-fauna is exhilarating. Knowing a little more about these animals could go a long way towards making sure any sighting in the bush is a safe one.

Moose are an icon of the wilds of North America, and since colonial times they have been a major part of our relationship with nature. For centuries Native Americans across the continent used the moose to make all sorts of tools and foods, and today the moose remains a landmark species for wilderness enthusiasts.

All about moose
The moose is the largest member of the deer family, with some males standing over seven feet at the shoulder and weighing north of 1,200 pounds. The largest bull moose on record was found in the Yukon and tipped the scales at 1,800 lbs.  Females are slightly smaller than males but still tower above most adults.

Moose have a varied diet, but they will often forage for food in wetlands and marshes. Moose are the only deer species that will feed underwater, and while they do feed on things like tree bark and human trash, looking for moose along waterways and swampland at dawn or dusk is a good place to start.

Bull moose sport impressive antlers, which can grow to over six feet wide. Antlers are distinct from horns in that they fall off after mating season and are regrown every spring. Antlers are unique to the deer family, and aside from caribou, only males grow antlers, which they use to fight amongst one another to win the favor of females. The rut, or mating season, begins in early fall for moose, and battles between males can be deadly. During this time, elevated levels of testosterone in males make them especially aggressive.

Moose safety
Encounters between man and moose rarely result in death, but moose can be dangerous, and attack more people per year than bears and wolves combined. Females can become aggressive with humans if they believe their calf is threatened, and bull moose should be considered extremely dangerous, especially during autumn when they are in full swing of the rutting season.

Knowing a little bit about moose could be crucial in making sure any contact with these dangerous animals is safe and respectful. Here's what you may need to know.

First, preparing for a hike or wilderness trek is the best way to maximize safety independent of any wild animal encounters. Bringing the right equipment like paper maps, your Pro Trek watch compass, and a first-aid kit will minimize the risk of getting lost or hurt.

Secondly, when hiking in wild areas inhabited by dangerous animals such as bears or moose, making loud noise every so often on the trail is very important. Making anything in the area aware of your presence with periodic hollering or singing is a great way to avoid startling or surprising any animals. A moose that hears you coming will likely to take off long before any encounter can occur, whereas an animal that is alarmed by the sudden appearance of a human is much more liable to act dangerously.

Seeing a moose in the wild won't always result in an unsafe situation, so long as they are given the space and respect they deserve. Moose are beautiful animals beloved for their unique characteristics. The risk of a dangerous run-in with a moose or other wild animal is extremely low, but keeping yourself safe is always important when hiking or exploring natural spaces.

Enjoy the outdoors with the ProTrek PAG240T-7. With great features like digital compass, barometric pressure, and temperature readings just one touch away, exploring moose territory is sure to be both safe and fun.