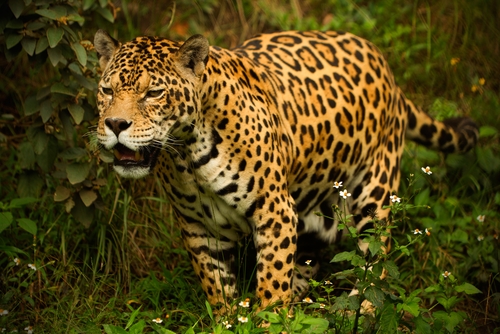 All across the U.S., state and national parks have served to preserve our national heritage, including providing habitat to some of the county's most iconic species. With the continued expansion of human development, these conservation efforts have become critical for dozens of species, many of whom are listed as endangered by the U.S. Fish & Wildlife Service.

Seeing any of these animals can be immensely rewarding. For anyone planning a future outdoor excursion, here are a few American endangered species to keep an eye out for:

Woodland caribou
Though caribou - also known as reindeer - still herd in the thousands in Northern Canada and Eurasia, the number of these deer has been severely reduced in the U.S. One subspecies, the woodland caribou, still has a small but stable population in the continental U.S.

Defenders of Wildlife reported that fewer than 2,000 woodland caribou still roam the alpine areas of northern Idaho and Washington. Unlike their cousins to the north, these caribou forgo the open tundra for the forests of the Rocky Mountains. Known as the International Selkrik population, these are rare but spectacular animals.

Black-footed ferret
Small and charismatic, these are among of the rarest mammals in the world. Found in the Badlands of South Dakota, the black-footed ferret has rebounded from the brink of extinction and conservation efforts from the FWS and other organizations have given these creatures another chance at flourishing in the American west.

Disease and destruction of habitat have been extremely detrimental to these little predators. By 1986, Defenders of Wildlife stated that there were just 18 black-footed ferrets. Today, there are approximately 600 animals in the wild and in captive breeding programs.

Wood stork
Across the American south, the wood stork can still be found patrolling wetlands and marshes in search of food. With a wingspan of 65 inches or more, these massive birds are impressive and wonderful to see during a hike or boating trip. With an almost prehistoric look, the wood stork is a unique and special animal that has also made a slow recovery in the last few decades.

Jaguar
Even as recently as the early 20th century, jaguars could be found in the deserts of southern California and Arizona. At 250 pounds, the jaguar is the largest cat in the New World. As such, these animals were seen as dangerous to settlers and livestock, and over-hunting eliminated jaguars from the U.S. for decades.

ABC News reported that although extremely rare, individual jaguars have been documented in the American southwest since the 1990s, and it may even be possible that a small breeding population has been re-established in the U.S. The next time you grab your Pro Trek PRG300CM-4 triple sensor watch and head out on a desert hike, keep an eye out for paw prints or any other sign of these elusive cats.

Wolverine
Although the wolverine is closer related to the black-footed ferret, it is much more akin to the jaguar in virtue of its awesome predatory might. These creatures may be relatively small, but they make up for it with unbelievable strength and a ferocious attitude. At the same time, the wolverine is both very intelligent and surprisingly social.

Unfortunately for the wolverine, its beautiful pelt made it a prime target for fur trappers throughout European colonization, and populations in the U.S. have struggled to recover. U.S. News & World Report stated that these animals are still very rare in the lower 48 states. Because the wolverine is so well-adapted to snowy conditions, however, raising temperatures due to global climate change could serve to undermine re-introduction or conservation efforts in the coming years.