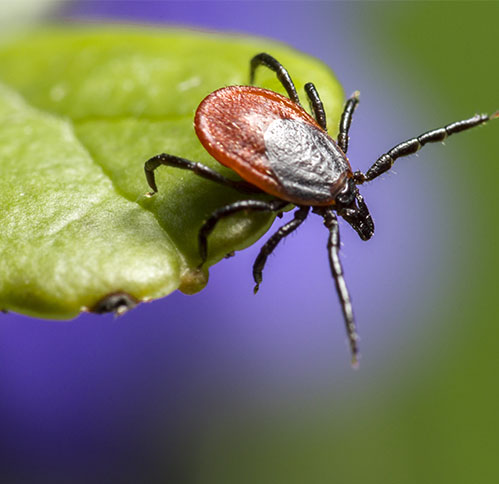 The summer is made for hiking. Abundant sunshine and warm temperatures make the season an opportune time to explore the many natural wonders that this vast, beautiful nation has to offer. While the summer brings conditions more favorable to hiking, the warm weather does herald the arrival of a natural threat - ticks. These tiny insects appear to be harmless, but as detailed by the American Hiking Association, a certain kind of tick- deer ticks - have the potential to transmit Lyme disease via their bites.

Lyme disease is a chronic condition characterized by pain, fever, chills and other symptoms, Healthline detailed. The risk of contracting Lyme disease is present largely in wooded areas, in the northern half of the continental U.S., from the Pacific Northwest through the upper Midwest to the Northeast. There is also a threat in parts of Europe.

While treatable, Lyme disease can be a debilitating, particularly for those who do not seek medical attention in the early stages of the illness. Read on to learn more about some of the important signs and symptoms of this condition, as well as important preventative strategies to keep in mind while hiking.

A closer look at Lyme disease
As detailed by the Mayo Clinic, Lyme disease is caused by bacteria transmitted to the bloodstream via a deer tick bite. There are two strains of bacteria that can lead to Lyme disease in the U.S. - Borrelia mayonii and Borrelia burgdorferi. There are other bacteria that can lead to the illness in Asia and Europe. Deer ticks can be distinguished by their black legs, with Tick Encounter explaining that they often resemble a poppy seed. Given their small size, deer ticks can be hard to spot on the body. Healthline explained that the illness can only be transmitted within a certain time frame - ticks need at least 24 hours to pass it on, so a momentary bite will not lead to infection.

Signs and symptoms
The symptoms of Lyme disease are varied and general, meaning they can signify conditions other than Lyme disease. The U.S. National Library of Medicine provided a breakdown of some of the most common symptoms. Perhaps the most noticeable first sign is a red, rounded rash. The CDC noted that as many as 80 percent of those infected with Lyme develop this symptom, which is known as an Erythema migrans rash.  Many compare its appearance to a bull's eye. The Mayo Clinic explained how this rash typically takes anywhere from a few days to four weeks to form, after the initial tick bite. The rash is rarely uncomfortable in and of itself - it doesn't usually itch or sting, for example. Without medical attention the rash can expand in size quite considerably.  The Mayo Clinic elaborated that in the early stages of the disease, when the rash first becomes apparent, it is also possible to experience symptoms such as body aches, high fever, chills, chronic tiredness and headaches. The symptoms are comparable to those experienced during the flu.

Without treatment symptoms can progress and worsen, the CDC maintained. Signs of later stage Lyme disease include memory problems, dizziness, chronic nerve pain, facial palsy, neck pain, headaches, heart palpitations and further rashes.  If you experience any of the above symptoms after hiking, especially if you notice a rash that could be Erythema migrans, seek medical help as soon as possible. With early treatment, Lyme disease is usually curable. The most effective treatment is antibiotics.

Strategies for Lyme disease prevention
While Lyme disease can be cured, it is still important to take steps to prevent yourself from contracting it in the first place. These strategies should be implemented at all times while exploring grassy or forested areas. As outlined by the American Hiking Society, some of the most effective approaches to Lyme disease prevention include:

The AHS stressed that if you do notice a rash in the shape of a bull's eye, it is very important to seek medical attention as soon as possible. This is because, as explained, Lyme disease is more treatable when detected in the early stages.

Be prepared by understanding the signs and symptoms for Lyme Disease and keep to the trails and out of the high grass by navigating with your WSD-F20.