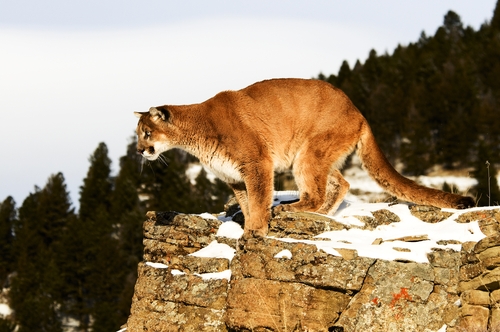 One of the most beautiful and magnificent of North America's native animals, the puma is an apex predator that deserves respect and admiration.

Males can tip the scales at nearly 180 lbs, according to the Mountain Lion Foundation, and these cats are wildly athletic. Not only can an adult puma reach speeds north of 45 miles per hour, but males can cover 40 feet or more in a single bound. Likewise, adult pumas can jump nearly 15 feet in the air.

Unfortunately, the relationship between humans and pumas has been tumultuous for the past few centuries, and only in recent memory have these cats been able to regain their former majesty.

Road to recovery
The organization Panthera reported that before European colonists came to the New World, pumas - also known as cougars, mountain lions, catamounts or panthers - could be found from New England west to British Columbia and across the Americas south to Patagonia.

Because pumas were seen as a threat to humans and livestock, populations were decimated, and although pumas still live in 28 countries in the Western Hemisphere, they have been eliminated from huge portions of their historic range. Panthera stated that the Florida Panther, a sub-species of puma, represents the only stable population in the Eastern U.S.

In the Western part of the country, pumas are listed as "Least Concern" by the International Union for the Conservation of Nature Red List of Threatened Species, and there is hope that the puma's range may be expanding.

According to Reuters, a male puma was struck by a car and died in Greenwich, Connecticut, just 70 miles from New York City. The animal in question had traveled nearly 1,500 miles east from South Dakota, DNA testing revealed. It was the first ever confirmed mountain lion in Connecticut in over 100 years, and although one individual is not enough to re-establish the puma population on the East Coast, it is testament to how resilient these animals are.

Ghost cat
One reason the Connecticut cat was able to go undetected for so long is that pumas are incredibly elusive creatures, which is why they are sometimes referred to as ghost cats.

Panthers are solo hunters that are incredibly adaptive, meaning they are just as successful stalking deer in American suburbs as they are catching catfish in jungle forests or chasing rabbits in the Andean foothills. National Geographic reported that next to jaguars, pumas are the heaviest cats in the Western Hemisphere.

Pumas are ambush predators and most active during the night or at dusk and dawn. They are stealthy, quiet hunters, and use the element of surprise to capture prey.

Safety tips
One reason the prospect of recognizing former territory is bleak for the puma is because humans fear these massive cats. According to National Geographic, there are four puma attacks per year in the U.S. and Canada.

When pumas do attack humans, it is usually a child or solitary adult. For anyone hiking or camping in areas with active cougar populations, bring your Pro Trek watch compass to avoid getting lost and employ these tips to minimize any dangerous encounters.

The Humane Society reported that not cleaning up trash and food at a campsite or cabin could lead to a curious or opportunistic animal visitor, including a cougar. While on the trail, making plenty of noise is important for lowering the chances of startling any dangerous animal, and keeping children and pets nearby will make it less likely that a puma may view them as easy prey.

When faced with an encounter, be calm and attempt to look as large as possible. Do not make eye contact or approach the animal. Unlike with bears, if a puma does attack, fight back as strongly as possible. Use sticks or rocks to fend off the animal.

Stay safe and sound by having the right gear to navigate your way around Mother Nature with the Pro Trek PRG270-1 featuring built in compass, 100m water resistance and thermometer.