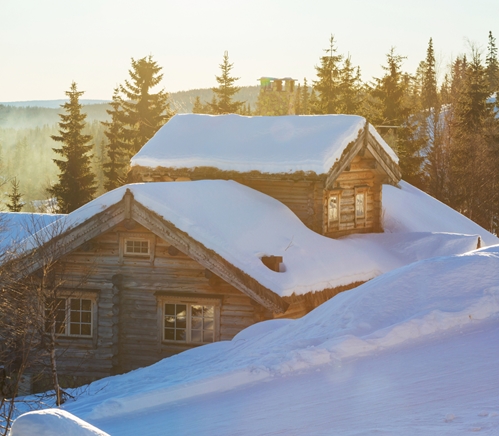 Short, dark, wintry days indoors often correspond with feelings of restlessness and an urge to get outside. These feelings aren't random -- they're part of an emotional state commonly called cabin fever. It is an term for the extreme restlessness or irritability a person may feel when confined to a solitary or isolated location for an extended period of time.

Many people are more prone to cabin fever in the winter months, when cold weather conditions and shortened days prevent them from going outdoors or spending time in the sunshine, and it's possibly connected to or exacerbated by Seasonal Affective Disorder. Cabin fever isn't a clinical condition, but arises out of a variety of factors that contribute to spending more time inside.

The most obvious cure for cabin fever is to get outdoors and interact with nature. A study published in the International Journal of Environmental Research and Public Health titled "Doses of Nearby Nature Simultaneously Associated with Multiple Health Benefits" suggested that even brief interactions with nature can promote cognitive functioning and overall wellbeing. However, in cases where this isn't possible, there are other steps to take to overcome the restlessness which cabin fever can produce.

Indoor plants
When going outdoors to experience nature isn't practical or possible, bringing nature indoors is an easy alternative. In addition to improving air quality and making a space prettier, keeping indoor plants is also associated with a number of significant health benefits. These include reduced stress and improvements in mood and task performance. Participants in a study published in the Journal of Civil Engineering and Architecture Research even reported feeling less bored in an environment with more indoor plants.

Physical activity
According to data from the U.S. Bureau of Labor Statistics, only 20 percent of Americans over the age of 15 engage in some kind of sport, exercise or recreational activity everyday. Staying active is a mood booster in any environment, but it becomes especially important in combating the listlessness and laziness that come with cabin fever. Passive activities like watching television can contribute to feelings of irritability and anxiety, but using indoor exercise equipment or finding other ways to get moving helps to improve those feelings. Some active household chores like vacuuming carpets and shoveling snow can yield the same benefits as exercise.

Exposure to sunlight
Reduced levels of sunlight in fall and winter are one of the leading contributors to Seasonal Affective Disorder, according to Mayo Clinic. Sunlight helps regulate circadian rhythms and exposure helps the body produce vitamin D. In the winter time, vitamin supplements or foods rich in vitamin D like fish, egg yolks or fortified milk are important alternate sources for this nutrient. But even wintry days can have at least a few hours of sunlight. High pressure readings on the barometer of the Pro Trek PRG600Y-L triple sensor watch mean clear skies are on the weather forecast. Even a few minutes spent outdoors can yield significant improvements to mood and health.