What to do if you encounter a wolf 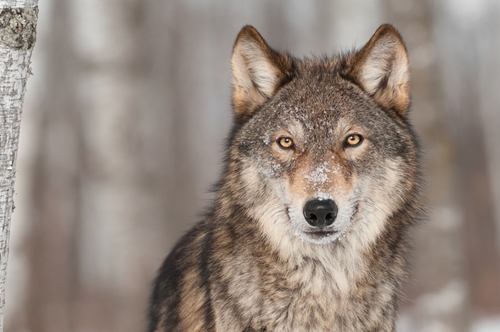 Outdoorsmen who spend a great deal of time in the wild know that there are many animals that pose a threat to their overall well-being. Depending on the area in which you're camping or hiking, the animals you may encounter will vary, as will the likelihood of an attack.

Wolves are among the most populous potential predators in the U.S., meaning outdoorsmen should exercise caution when participating in an activity that may bring them face-to-face with these creatures. Being proactive is key - you want to avoid an encounter as much as possible, but you should also brush up on what to do should you inevitably face a wolf.

Spotting wolf tracks
Before leaving for your adventure, do some research about the location you're traveling to. Are wolves among the native animal population? If so, you'll want to learn how to identify wolf tracks so you can avoid accidentally following or bumping into one.

If you've ever seen a dog's print, you're in luck. Since wolves are quite similar to dogs (in size and appearance - not in temperament), their tracks look identical to those dogs would produce. Wolf tracks are larger, however. You'll see one large base surrounded by four ovals - the print is also similar to a coyote's, but a wolf's will be much bigger, closer to about 4 to 5 inches.

Protecting your campsite
Thankfully, wolves don't pose a very serious threat to humans. While they are populous in wooded areas, they tend to leave campers alone. That being said, wolves have been known to cause injuries when provoked. You'll want to thoroughly clean your campsite before bed to ensure no animals can access your food. Hang ingredients from tree limbs, clean all cooking utensils and keep garbage far from the campsite.

Avoiding confrontation
If you happen to see a wolf in the wild, avoiding a fight is the best way to prevent injuries. Do not engage with the animal - it may look like a bigger version of your childhood dog, but that doesn't mean the creature will be as friendly. Feral wolves will attack when threatened, so if you spot one, do not walk toward it. Leave a clear path so the animal can carry on about its business. Most wildlife experts agree that wolves will likely retreat once they spot you, so leave the animal alone to prevent an attack. It's best practice to not let the wolf get closer than 300 feet, so back away if you're within a close proximity.

It's also imperative that you follow common sense when camping outdoors. Do not attempt to feed or pet wolves, as they will not respond kindly. Use your watch compass to track which direction the wolf wanders in so you can avoid following it in the near future.

Managing an attack
If you do happen to provoke a wolf - or pack of wolves - it's important that you keep your wits about you and do not panic. It's critical that you do not run away either - wolves may view you as prey if you give them an opportunity to chase you. Instead, make yourself appear menacing and threatening. Use what you have to your disposal - throw rocks and sticks, raise your hands above your head and shout to scare the creature.

If the wolf still persists and latches on, curl in a ball and protect your face at all costs. When the animal relents, contact emergency medical services ASAP.

With a Protreck PRW3000-2 watch, you can help avoid dangerous situations like this. Whenever you're out in the wilderness, you should always know where you are. This watch comes complete with a compass so you can easily trace your steps at hand.