What to do if youre bitten by a rattlesanke 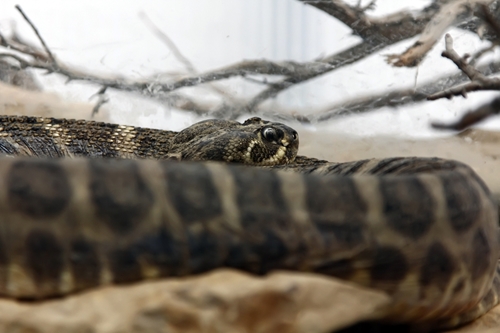 If you're hiking in the deserts of California, don't try to take selfies with the copperheads. That goes without saying for most people - but not Todd Fassler. The San Diego-area man was bitten by a rattlesnake this July while allegedly trying to take a selfie with the creature, according to CBS News.

Luckily, Fassler was rushed to a hospital and didn't succumb to his injuries, unlike the five or six Americans that die from poisonous snake and lizard bites in the country every year, according to the Washington Post.

It's one of the most common hiking "what if" scenarios: You're bitten by a snake in the wide open wilderness. Now how do you find help before the venom gets the best of you?

How dangerous are rattlesnakes?
First, keep in mind that rattlesnakes, while very venomous, don't often pose a threat to humans. Most species - like the eastern diamondback rattlesnake, which is the largest venomous snake in North America - can be very imposing but actually work to avoid human contact, according to National Geographic. They often bite only as a means of defense. If you hear that characteristic rattle sound, look up from that watch compass, identify where the snake is and put distance between you and it.

If it's too late to move away from the critter and you do get bitten, there's a chance you still may not be in grave danger. The U.S. Fish and Wildlife Service explained that a moderate proportion of bites contain little or no venom. These are called dry bites. Venom is physically tasking for a snake to produce, so it's usually within the creature's best interest to conserve what they have. Therefore, somewhere between 25 and 50 percent of all rattlesnake bites are dry and far less harmful than a venomous bite.

Still, you won't know for sure whether you've been injected with venom following the bite or not, so it's better to be safe than sorry.

What to do in the event of a bite
Rule one: don't try to get your friend to suck the venom out. This is ineffective, will waste time and is generally frowned upon. Instead, the California Department of Fish and Wildlife and the California Poison Control Center suggest a more reasonable approach.

You'll want to keep your heart rate low and call someone as soon as the bite occurs as well. That's why it's always wise to hike with a friend and with a phone packed in your bag.

For many snake bite victims, recovery from a rattlesnake is as simple as receiving antivenin treatment at a nearby hospital. Most facilities in regions with venomous snakes carry the necessary equipment to treat bites. However, the amount of antivenin you need depends on how much venom the snake uses.

In Fassler's case, he depleted antivenin supplies at two nearby hospitals during his treatment, according to the Washington Post, but he recovered. Unfortunately, this lead to a more dangerous concern - a hospital bill totaling over $153,000.

Avoiding venomous snakes should be pretty easy task if you take the necessary precautions. Now figuring out which watch you want for your next great adventure should be even easier. There are so many great choices in the Pro Trek line but the PRG270-4A is a great choice if you are looking for some fun color and great technology.