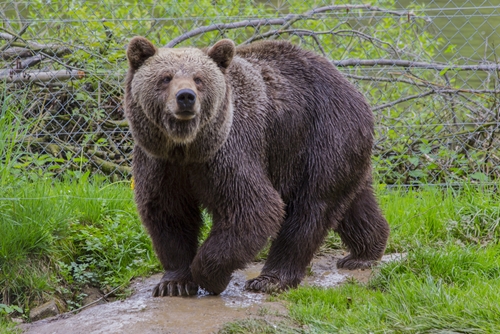 When you're preparing for a camping trip, you're probably only thinking about the bare necessities like food, water and shelter. But the wilderness doesn't always cooperate, so you have think beyond just basic needs - it's time to consider the bear necessities.

National Geographic magazine recently interviewed Dave Garshelis, bear project leader at the Minnesota Department of Natural Resources, who said bears are starting to make a comeback all across America.

"There's a pretty dramatic increase in bear populations across the U.S., and people are going to be encountering bears more and more," Garshelis told the magazine.

Because of regulated hunting and more habitat preservation, even the swamps of Florida have had bear sightings. That being said, the chances of being injured by a bear are extremely low - only one out of 2.1 million people will ever be at real risk, reported the National Park Service. That doesn't mean that you should be unprepared for a bear attack, however. If a bear approaches you in the wild, you're on its turf and it will not hesitate to attack you, so you need to learn how to protect yourself so you don't become the one in 2.1 million.

Check out these types of bears you can encounter in North America, and what to do should you ever encounter one:

Black bear
The black bear is the most common but least dangerous bear in North America, reported Geology.com. They will try to avoid humans as much as possible, but they are attracted to food, and will get aggressive if you stand in the way of their next meal. Should you encounter a black bear, however, just remind yourself that they are more afraid of you than you are of it, so don't run. All bears can easily outrun you. Instead, stand and face the bear making yourself look as big as possible, explained the Humane Society of the United States. You can achieve this by spreading your arms and legs or using your clothing to appear bigger than you are. This should scare the bear away, but if for some reason it still attacks you, there's only one thing you can do, said the source. Fight back - don't play dead.

Brown bear, aka the grizzly bear
This bear kicks the aggression level up a notch. According to National Geographic, you want to get away from these guys slowly. Don't provoke them any further. The source explained that it's important to keep calm if approached by a grizzly. If this bear is feeling threatened, it will stand up, slap the ground and make snorting sounds, but this only means the bear is nervous, not aggressive, so don't freak out. Should a grizzly attack you, do not try to defend yourself. Only play dead once the bear has made contact with you by trying to protect your stomach and neck as best you can, said the source.

Polar bear
These suckers will hunt you - for days sometimes. They're the largest of the three bears found in North America, and they are not playful characters, they are vicious hunters. Polar Bears International explained that these bears are innately curious, so if you're drawing attention to yourself in any way they will likely investigate. They have an excellent sense of smell and sharp teeth that help them find food in frozen, arctic conditions - so if they attack you they can take you down fairly quickly. You can try to scare them away with noise, but if a polar bear attacks, your best course of action might be to shoot it, reported the Guardian magazine.

Gear you should have on hand in case of an attack:

Bear spray: This is usually a type of pepper spray, but it can be effective in warding off an aggressive bear. Just make sure you have it handy and know how to use it so you're prepared should the time come, cautioned National Geographic.
Noise maker: This could just be a simple can filled with rocks, but if you think a bear is getting close, a noise maker should shoo them away, said the source.
Casio Protrek watch: A watch compass will come in extremely handy when you need to get away from a bear to a safe place.
Flares: Carry a flare on your person to startle the bear if your other tricks don't work, recommended Polar Bears International.
Firearm: This should be a last resort, but if an aggressive bears starts hunting you, it might be your only option.

Be prepared with the ProTrek PRG300CM-3, camouflage in color with one-touch access to digital compass, barometric pressure/altitude, and temperature readings to keep you informed on the environment when you're out in the wild.