What you should know about running with man's best friend 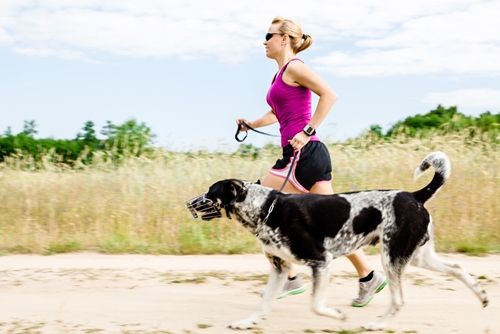 A new study published by the journal Animal Cognition suggests how dogs have evolved into the perfect human companions over time, according to ABC News. Researchers noticed that dogs and humans both produce more oxytocin - otherwise known as the love hormone - while interacting.

Way back in the origins of dog and man, there was a chemical bond that made us into the best of friends, but that doesn't mean every owner knows what's best for their four-legged pal.

Every day, there are owners that go for long runs or hikes with their pets, negligent of how these long journeys can affect their dogs. Before you hit the open trail with the pooch, consider a few of these important points.

1. Your dog doesn't sweat
Unlike humans - who are built to run long distances thanks to the way we cool ourselves by sweating - dogs primarily cool down by panting. This makes it harder for pups to reduce body temperature while running constantly. Dogs weren't made to jog the length of a marathon, so you need to keep an eye on your pet if the distance is too great. Dogs can quickly overheat while running nonstop for a long period of time.

"You definitely can kill your dog," veterinarian Marcia Smith told ACTIVE.com. "And it happens fast."

Keep an eye on your pup and your watch thermometer while you're out. Blistering heat isn't safe for dogs to run in for long. Symptoms of heat exhaustion in your dog include:

2. Treat your pup like you treat yourself
Humans and dogs aren't the most alike in the animal kingdom, but they share similarities nonetheless. Think about your running routine and try preparing your pup in the same way.

Hydration is key to while you're out for a jog, and you should give your dog some frequent water breaks, too.

While you have a pair of shoes on your feet to protect from rocks, broken glass and other things, your dog's paws aren't as well protected. Beware of the surfaces you're running on with your pet. In the winter, that means keeping road salt and deicing chemicals in mind. In the summer, avoid hot asphalt. Do your pal a favor and check his pads after a long run, too, especially if you see him start limping on the trail.

3. Built to run
There are hunting dogs and herding dogs and dogs built to fit in a purses. In the same way, there are also dogs that are naturally made for long distance running and those that aren't. It goes without saying that your short-legged dachshund or Welsh Corgi wasn't made for jogging. There are quite a few breeds that handle hiking much better, though. Collies, German shepherds, greyhounds, pointers, golden retrievers and boxers are just a few, according to the Dog Breed Info Center. Research how well your dog can handle a run beforehand, or check with a veterinarian.

Also, remember that dogs can be too young or get too old to run. Canine arthritis keeps many pets from jogging with their owners late in life.

4. It's all about the training
When you started running, you probably didn't tackle a marathon to begin with. It takes time to build the endurance necessary to run for long periods. The same goes for your dog. Gradually build up to longer distances and greater speeds so you know your pup can handle the pace. Start slowly and run for short periods while you're just starting out. A dog's pads toughen up over time to make running more comfortable.

ProTrek's PRG280-1 is built with a twin sensor that includes a thermometer so you can keep man's best friend safe and happy on those warmer days.