10 animals you might see in South Africa's Kruger National Park 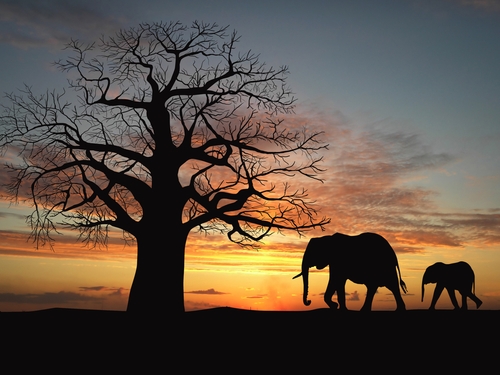 Africa is known across the world as one of the premier destinations to enjoy wildlife, and Kruger National Park is perhaps the best location for getting up close to some of the largest and most iconic creatures. The park spans from South Africa into southern Mozambique and is home to a dizzying number of animals, including each member of Africa's "big five." These are the African lion, African elephant, Cape buffalo, African leopard and rhinoceros.

1. African lion
Though it might be known as the king of the jungle, the African lion does much more of it's hunting in the rolling grasslands and scrub forests in places like Kruger. Although lions can spend nearly 18 hours a day sleeping, there is still the opportunity to see these massive predators in action.

2. African elephant
As the world's largest land mammal, the African elephant is undoubtedly one of nature's most impressive animals. As Siyabona Africa reported, these creatures can weight up to 7 tons or more, and like any creature, should be treated with respect.

3. Cape buffalo
Giant herds of Cape buffalo roam Kruger, and while they may be a bit too large for some of the park's smaller predators, lions will stalk and attack young or weak individuals. With imposing horns and a feisty temperament, however, Cape buffalo are more than capable of protecting themselves from even the most ferocious lions.

4. African leopard
An elegant, solitary hunter, leopards use a combination of stealth and power to take down prey. Leopards are notorious for storing kills high in the tree tops, and visitors may be lucky enough to see one of these gorgeous cats lounging in the branches.

5. Rhinoceros
Although they may look a bit like an elephant, rhinos are actually more closely related to horses. These animals have a reputation for being temperamental, but in fact they can be rather social and surprisingly gentle. Still, it's best to keep a safe distance.

6. Spotted hyena
Another genetic curiosity, hyenas fall closer on the mammalian family tree to cats and weasels than they do to dogs. With a wide range of vocalizations and a knack for mischief, hyenas are wonderful creatures to observe on a safari.

7. Giant eland
There are many species of antelope and other hoofed mammals roaming Kruger, but the giant eland is perhaps most striking. Males can stand over 5 feet at the shoulder and weight nearly 1,200 pounds. This makes the eland the largest species of antelope in the world.

8. The bateleur
A medium-sized eagle, the bateleur is one of over 500 species of bird that lives in the park. A beautiful orange and black coloration make this an especially fantastic creature to spot.

9. Nile crocodile
Across the world, few crocodiles species grow as large as the Nile crocodile. At nearly 15 feet in length, these monstrous reptiles can live to be 100 years or more in the wild. Slow and methodical, they are both effective predators and shockingly protective parents. Unlike most reptiles, both mother and father crocodiles protect nests and hatchlings from monitor lizards, birds and other egg thieves.

10. African wild dog
The International Union for Conservation of Nature reported that Kruger is one of the most important refugees for the African wild dog. Also known as painted dogs, these canines have coats that are a blend of blonde, black, red and white fur. These animals are swift, well-coordinated hunters and charismatic creatures to see during your trip to the park.