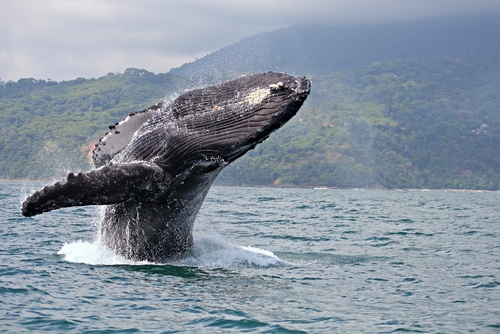 Through conservation efforts and important environmental laws, the wildlife that calls North America home has been able to recover from the often detrimental hunting practices and land management of the 19th and early 20th century. As a result, some of the continent's most iconic and beautiful species have been able to recover, and in many cases, repopulate former territories.

Because of legislation such as the Endangered Species Act and other interventions, outdoor enthusiasts can once again enjoy the majesty of the once-threatened bald eagle or a thunderous herd of American bison. Grab the Pro Trek PRW3510Y-1 watch with triple sensor technology and keep an eye out for some of these species that are on the rebound.

1. The peregrine falcon
According to Eco Watch, the fastest predator in the world is slowly recovering after decades of decline.  Peregrine falcons - raptors that can reach speeds well over 200 mph - are intelligent birds of prey that use their unbelievable quickness to catch small birds and bats.

In 1975, the population of American peregrine falcons dropped to just 324, and the birds were extinct from their former ranges on the east cost. Today, Eco Watch reported that numbers have grown and reached 3,500 nesting pairs. Like many endangered species, human intervention has played a critical role in conservation and breeding efforts.

2. The grizzly bear
Live Science stated that grizzly bear, once one of the continent's most formidable predators, has lost huge areas of habitat and been removed from much of its former range. For example, the bears are no longer found in California, despite being featured on the state's flag. Prior to European settlement and American expansion west, the bears lived from Alaska south into Mexico, and as far east as the Mississippi River. Like many animals in the continent, as human settlement expanded, the grizzlies home range was severely reduced.

In the 1970s, the population of grizzly bears in the American West was as low as 136. With protection from the federal government, the bears have been able to recover. Grizzlies now occupy nearly twice as much land as they did in the 70s and the population of bears is estimated at roughly 700 individuals across Idaho, Montana and Wyoming.

Predators like bears or wolves are important for maintaining order in a given ecosystem. Without these animals, species like deer or elk may balloon in population, creating an imbalance in the amount of food and resources available to other animals.

3. The humpback whale
Once hunted for meat, sport and blubber, the number of humpback whales in North American waters have rebounded thanks to protection from the Endanger Species Act and other initiatives. Eco Watch stated that hundreds of thousands of these whales once patrolled the Pacific and Atlantic coast, but by the 1960s, there were just a few thousand remaining. In the Pacific, these animals have gone from a low of just 1,200 individuals to a population 22,000 strong.

Today there are as many as 5 million gators living in the American South, ranging from North Carolina down into Texas. Like the grizzly, the alligator is a keystone predators that can limit one species from overwhelming a given waterway or habitat.