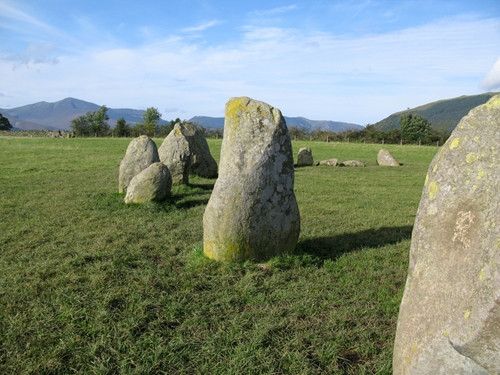 If you're an avid hiker looking to embark on a new adventure abroad, look no further than Britain's Lake District National Park, located in the county of Cumbria in northwestern England. This region is breathtakingly beautiful, comprised of rolling green hills, towering peaks and 12 pristine lakes, which are some of the largest in the U.K. As reported by the park's official website, encompassing some 912 square miles, the Lake District attracts close to 19 million visitors each year. Many head to the site to drink in its grandeur and beauty, as well as to engage in a range of outdoor activities, such as biking, hiking, boating and fishing.

Furthermore, the park has long boasted a storied literary heritage, with acclaimed British writers such as William Wordsworth and Beatrix Potter drawing great influence from the rugged green landscape. This strong cultural identity lead to the area being designated as a UNESCO World Heritage Site in July 2017.

In need of further convincing? Check out seven of the most compelling reasons why you should bump the Lake District to the top of your "must-visit" list:

1. The scenery is stunning
The Lake District is arguably home to some of the best views in the British Isles. As detailed by Wanderlust Magazine, in addition to meandering around the shorelines of the bodies of water the region is famous for, you can also hike up and explore the many valleys and peaks. The unique topography of the park is a consequence of the most recent Ice Age, when glacial erosion carved the landscape we see today.

2. The climate is mild
Compared with other spots favored by hikers in the U.S. - Yellowstone National Park, for example, or Death Valley National Park - the climate of the Lake District is relatively mild and extreme conditions, both in terms of hot and cold weather, are rare. Rainfall in plentiful year round. The winters can be chilly, with the park's official website noting that the average high temperature in January is in the low to mid 40s Fahrenheit, with overnight lows close to freezing. Still, heavy and prolonged snowfall is rare, and with the right supplies - warm, waterproof clothing and your Casio Pro Trek PRG600Y-1 equipped with thermometer - winter hiking can be pleasant. Summer is even more ideal, with mild to warm temperatures - extended hot weather is virtually unheard of. The source noted that the average high in July is in the middle 60s.

3. The pubs are plentiful
Few things evoke British culture more than a quaint countryside pub, and the Lake District National Park is practically laden with them. That means you'll have plenty of options for that crisp pint after a long day on the hiking trail - often in quaint historical buildings that date back centuries. Furthermore, seizing on the region's reputation as a beer lover's paradise, the Evening Standard noted that a number of startup brewers have emerged in recent years, adding a contemporary flair to this otherwise traditional scene. In terms of leading establishments in the area, the Kirkstile Inn at Loweswater is particularly acclaimed, as it houses its own brewing company - Cumbrian Legendary Ales, Visit Britain noted. Their beer has won awards, so be sure not to miss it!

4. The mountains are challenging
If you're in search of a more robust outdoor adventure, the Lake District has you covered: As reported by Cottage Escapes, the highest mountain in all of England is stationed within the park's borders. Towering at 3, 210 feet, Scafell Pike is a challenging and worthwhile climb.

5. There is varied wildlife
As detailed by Express, there are so many different animals to see in the Lake District - there are around 100 species, ranging from mammals to fish. If you're lucky enough while out on the hiking trail, you may catch a glimpse of red deer or even a Northern Eurasian lynx. It's also a great idea to keep an eye on the sky - as reported by Heart of the Lakes, the park is home to last remaining golden eagle in Cumbria. This majestic species of bird is one of the biggest in Britain, so be sure to snap a picture if you can!

6. The food scene is incredible
Lake District National Park is home to a number of settlements, many of which have become renowned for their food scene. As explained by Wanderlust Magazine, the food scene has developed in relation to the farming industry, which is a major player in the local economy. The emphasis on fresh produce and ethical farming means that the food quality is more often than not outstanding. In terms of must-visit restaurants the source recommended visiting one of the region's four Michelin-starred eateries.