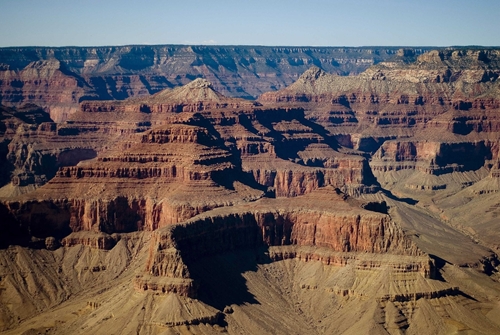 When one envisions the natural beauty of the continental United States, it's likely that Arizona's Grand Canyon comes to mind. Designated as a national park in 1919, the Grand Canyon is a gorge, formed over millions of years, thanks to erosion from the Colorado River, the U.S. National Park Service detailed. Today, the breathtaking formation stretches for 277 miles, and is roughly a mile deep. The canyon itself is around 10 miles wide, with the river serving as the marker between the north and south rims. The complete area of the park, however, comes to around 1,904 square miles.

Given the sheer majesty of the landscape, it's unsurprising that the Grand Canyon National Park attracts upward of 5 million visitors every year. If you are planning a trip to the Grand Canyon - perhaps you have your camping gear, shoes, and PRO TREK's PRG600Y-L ready for a hiking adventure - you are no doubt eager to learn as much about your destination as possible. While there is a lot of information about the park out there, there are a number of amazing facts about this park that you may not be aware of! Read on to learn more:

1. The park has multiple climates
Given the enormous differences in altitude throughout the park, the weather conditions, in terms of precipitation and temperature, are often markedly different from one area to the next. As explained by the National Park Foundation, the weather is typically much warmer and drier at lower altitudes, toward the Canyon floor. Indeed, as reported by The Canyon, highs in excess of 100 degrees Fahrenheit are not uncommon in this area during the summer months.

The Northern Rim, on the other hand, tends to experience cooler and wetter weather year round. The average summer temperatures in this area climb only into the 70s Fahrenheit. As such, visitors are encouraged to pack and prepare for a range of conditions. Fall, winter and spring are moderate and changeable, with chilly weather dominating in January and February. The Canyon noted that snowfall is possible along the rims of the Canyon during this time.

3. Native American tribes have long called the Canyon home
According to Travel + Leisure, humans have called the Canyon home for roughly 12,000 years. There is evidence of human settlements that date back to an era known as the Paleo-Indian period. After that point multiple Native American Tribes settled in and around the Canyon, with notable tribes including Havasupai and Navajo viewing the area as sacred land. As noted by the National Park Foundation, the Havasupai have their own reservation at the base of the Canyon. There is a settlement within the borders of the reservation known as Supai Village, a place that just 208 people call home. As such, Supai Village has the title of the most remote community in the contiguous U.S.

The National Geographic explained how European settlers from Spain arrived much later - evidence indicates that Europeans were first present in the Canyon around 473 years ago. There is evidence that they visited the Canyon, but didn't establish a permanent settlement.

4. The area is home to pink snakes
The Grand Canyon boasts a varied wildlife, including six species of rattlesnake. Live Science explained how one species in particular is pink in color. The unusual shade is helpful for the snakes, as it allows them to camouflage themselves among the rocks and hunt more effectively. The snake has the apt moniker - the Grand Canyon Pink Rattlesnake. The source noted that it is the most common kind of snake found within the park, and that it feasts primarily on lizards.

6. There is an enormous gap in the rock history
Geologists and natural historians have long studied the rocks with the Gran Canyon to gain further insight its age and formation, as well as the natural history of the region. As explained by the National Park Foundation, however, there are rocks missing from a period that spans a whopping 950 million years. Scientists were able to figure this out because an layer of rock that is 250 million years old lies on top of another layer estimated to be 1.2 million years old. Consequently, it is clear that the Canyon is missing hundreds of millions of years of rock. This age disparity is actually not uncommon, and can be observed in other rock formations throughout the world - researchers call it the "great unconformity." There is no definitive theory that accounts for why this occurs, meaning that we are pretty much in the dark as to where the rocks from 950 million year window went.