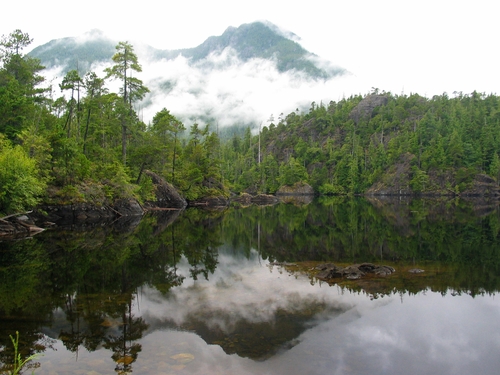 The Pacific Northwest is home to one of the world's most expansive and remarkable temperate rainforests. Like the jungles of the tropics, this region receives a considerable amount of precipitation each year. Here, the broadleaf trees and palms are replaced with towering conifers and lush ferns, creating a unique and beautiful landscape. With hanging fog and jagged peaks, this stretch of wilderness is known as a cloud forest.

This region offers a great number of outdoor activities to enjoy. Visitors can kayak along the rocky shores, hike among the verdant hills and camp among spectacular wildlife. Here's a little bit more about the temperate rainforests of North America and what makes this area so special:

Cloud forest
According to National Geographic, cloud forests are defined by characteristic fog that blankets the landscape. In the Pacific Northwest, wet ocean air meets tree-covered slopes that makes it difficult for precipitation to rise, and instead, it settles along the coast as low-hanging clouds and mist.

This abundance of moisture bodes well for lichens, mosses and other plant life. As such, the forest floor in the area is an inviting bed of greenery. The extra water and low levels of light also create a specific spoil chemistry that also aides the growth of certain species. The Hoh rainforest in Olympia State Park in Washington, for example, is one of the most verdant places on earth. Exotic Hikes reported that this makes for unrivaled outdoor adventuring.

Gorgeous views
The Pacific Northwest is home to snow-capped mountains and impressive valleys, much of which is lined with conifer trees and other plants emblematic of a temperature rainforest. Visitors may hike amid a dark and secluded stretch of wilderness only to reach a look out that stretches for many miles beneath. Be sure to use your Triple Sensor PRG300-8 watch compass when out on the trail.

Closer to the coast, the cloud forest becomes even more enchanting. Clear mountain streams great the mighty Pacific, enticing human and animal visitors alike. There are opportunities for fly fishing, camping on the beach and more, all offering a chance to have an intimate experience with such a wonderful landscape.

Spirit bears
Among the shadows of the cloud forest roams a remarkable creature that perfectly captures the majesty of the region. The spirit bear - also known as the Kermode bear - is coated in blonde or white fur. A subspecies of the American black bear, this trait is found only in British Columbia, Canada. As many as 1 in 10 of the bears in the region have white coats.

Though the spirit bear has been a mainstay in indigenous folklore for generations, the BBC reported that there may be a competitive advantage brought about by lighter coloration. Spirit bears were found to be 30 percent more effective at catching fish than bears with black fur, possibly because they are less visible to fish. These bears are only found in the cloud forest of the Pacific Northwest, yet sightings can be rare. In the event of an encounter with a bear or any other large animal, visitors should be calm and respectful.

Other flora and fauna
The area boasts more than just spirit bears, and from rocky shorelines to icy peaks, animals and plants have a number of different environments to settle. Grizzlies and mountain lions both prowl the area, and again, it's best for outdoor adventurers to exercise caution. Elk, white tailed deer and other creatures can also be found in abundance in this area.

Along the coast, orcas prey on harbor seals and sea lions, and the intricate coastline creates an opportunity to spot these animals beneath mighty spruce, hemlock and other types of conifers.