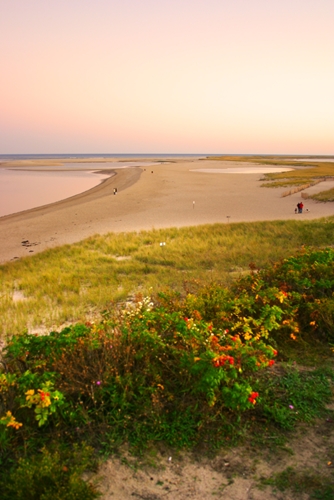 The arm-shaped peninsula of Cape Cod is not simply one of the most beloved areas in Massachusetts, but throughout all of New England as well. From the quaint beachside towns like Harwichport and Chatham to the stunning beaches along the Cape Cod National Seashore and the austere sand dunes around Provincetown, there is a great deal for visitors of all ages and interests to love. As such, it remains a major vacation destination, for New Englanders and people all over the U.S.

While you'd hardly be wrong to be thinking most prominently about Cape Cod's beaches and all of the activities pertaining to them - swimming, fishing boating, even kayaking for those staying on the much calmer waters of Cape Cod Bay as opposed to the ocean - the region's hiking opportunities are not to be taken for granted. Most of them range from easy to moderate in terms of difficulty, largely because the Cape's terrain features plenty of wooded areas but few places of high elevation. That said, lovers of the great outdoors won't be wanting for fascinating terrain and incredible views on the best of these trails, and you'll get plenty of use out of your solar powered PRG600Y-L.

Take a closer look at a few of the can't-miss Cape Cod locations that offer chances for great hiking below:

Great Island Trail and Jeremy Point
Located in Wellfleet, Massachusetts, at the midpoint of the Lower Cape, the Great Island Trail is one of the peninsula's finest nature preserves and provides lovers of rugged natural expedition with the most intense hiking opportunities on the peninsula. (For many, these are the most rewarding hikes.) Even the shortest, simplest possible route - a trip back and forth along the Tavern Loop trail and returning to the Great Island parking lot - is 3.9 miles in length, which isn't exactly a cakewalk. Those who want to explore the entirety of this area and go all the way up to the Jeremy Point overlook for its awe-inspiring view will need up to five hours of spare time, and should plan to hike 8.8 miles.

Great Island requires no small effort to explore, but we can assure you that doing so will be worth it. Perhaps its best attribute is the wide variety of the Cape's environmental highlights packed into one area - impressive pitch-pine forests, grand beaches, salt marshes and a number of elevated areas, which, as previously mentioned, aren't common on the Cape.

Keep in mind that Great Island Trail is within the boundaries of the Cape Cod National Seashore and is thus regulated by the National Park Service. Thus, diverting your own path from the area's clearly demarcated trails could get you in trouble with the rangers. Additionally, high tide submerges certain parts of this area at times and some chunks of the path have log steps.

The Pamet Area Trails
While considerably shorter than any of the paths on Great Island - about 1.2 miles round trip for the main drag, four if you include the winding fire roads that veer off the primary trail  - the Pamet Area Trails offer another chance to hike across some rough and steep terrain. This nature park is in Truro, Massachusetts - a tiny town even by typical Cape standards - and looks out over both the Pamet River valley and the crashing waves of the Atlantic Ocean.

As noted by the NPS, glaciers once dominated the terrain of the Pamet area, and you can see some evidence of those giant ice shelves' impact by climbing Bearberry Hill and gazing down into the landscape of the valley. Additionally, visitors can stop to walk through the remains of a cranberry harvesting boghouse and examine what was once a critical part of the Cape Cod economy.

Beebe Woods
This area encompasses a whopping 383 acres of land in Falmouth, Massachusetts, not far from the Bourne and Sagamore Bridges that connect the Cape to the rest of the state. The woods on the estate once owned by dry goods baron James Madison Beebe in the late 19th century eventually passed to the Lilly family, who donated them to the Falmouth town leadership to be conserved.

Those interested in traversing the many miles of hiking paths throughout Beebe Woods must visit between April 15 and Oct. 31, as it is closed during the late fall, winter and early spring months. While not as tough of a walk as other Cape trails, the impressive array of natural highlights makes it a worthwhile destination. In addition to the quaint Punch Bowl and Ice House Ponds, the Beebe Woods are adjacent to Peterson Farm, where sheep and border collies are raised, and deer, foxes, coyotes and an extremely wide variety of birds can be seen.

Lowell Holly Reservation
This nature preserve, totaling 135 acres, is shared between the towns of Mashpee and Sandwich, Massachusetts. Between former carriage roads and foot paths, Lowell Holly has four miles of trails for hikers to enjoy and offers satisfying waterfront views of Mashpee and Wakeby Ponds. According to the park's official website, the land is unique for having somehow avoided deforestation for the purposes of industry over the past 200 years it's been a settled area, remaining almost entirely intact.

The trails are ideal for any moderate-level hiker and thus shouldn't be an issue for you. Also, swimming and fishing are permitted in both of the ponds.