How to avoid conflict with nature's most fearsome predators 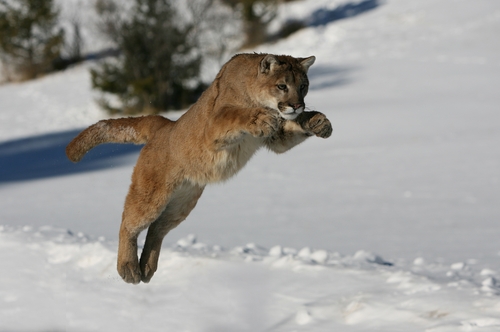 Camping or hiking is an excellent way to get an intimate look at wildlife, but if you aren't careful, you could get a little too close and put yourself in a dangerous situation. Armed with sharp teeth and deadly claws, predatory animals are among the most fearsome creatures, even if violent run-ins are quite infrequent.

Still, just the threat of coming across a mother bear is enough to frighten even the most seasoned outdoor adventurer. Knowing what kind of behaviors to look for and how to stay safe is essential for minimizing the risk of any conflict.

Bears
Brown and black bears can take down large prey animals, but these omnivores are also happy to munch on berries, nuts and even grass. As such, they rarely, if ever, view humans as a source of food. That said, these massive animals will protect themselves if they feel threatened, especially if cubs are nearby.

To avoid conflict, make noise while hiking. This will lower the risk of catching a bear off-guard. Make sure any food you bring with you is secure, as the predators have an incredibly acute sense of smell.

As Bear Smart reported, if you do come across a bear, back away slowly and don't turn your back on  the animal. Maintain eye contact and stay calm. If you are attacked, cover your head and neck as best you can and play dead.

Mountain lions
These ferocious predators require a different approach for staying safe. If a mountain lion attacks you, your best bet is to fight back, because according to Safe Bee, the cats won't give up as easily as a bear.

On the whole, mountain lions very rarely target humans, especially groups of full-grown adults. Pets and young children, however, could attract a hungry cat. When spending time on the trail, keep everyone close together, and use your Pro Trek PRWS6000Y-1 Triple Sensor watch to monitor the time. Mountain Lions are usually most active at dawn and dusk.

Alligators
There have been just two fatal alligator attacks in Florida since 2007, but USA Today stated that this doesn't mean these animals aren't dangerous. Alligators have one of the strongest bites in the animal kingdom and a single defensive chomp could be exceedingly vicious.

When traveling in the American south, be especially careful around waterways. Alligators are masters of camouflage and stealth and usually grab unsuspecting prey that ventures too close to the shore. So whether you're golfing, hiking or boating, be cautious. If you do see an alligator maintain a safe distance and keep in mind that these reptiles can move shockingly fast.

Coyotes
While wolves are quite rare in the continental U.S., coyotes have become increasingly numerous from coast to coast. The animals aren't likely to target humans, but pets may run into conflict with these canines. It's best to keep your dog on a leash out on the trail to avoid the possibility of any issues. Like mountain lions, dawn and dusk in particular should be avoided if possible.

Whether it be coyotes, bears or any other predator, read the animal's body language and remain conscientious to minimize the risk of conflict.