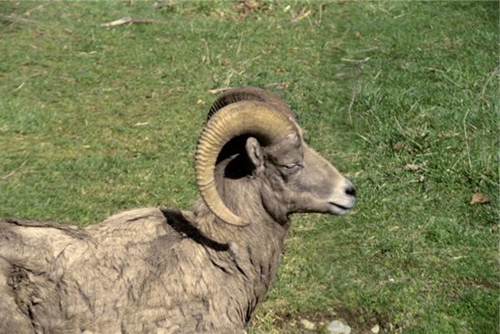 Though your average barnyard sheep or goat may be a little uninspiring or dull, a wild relative reigns supreme in the rugged American West. The Bighorn Sheep, named after the animal's impressive headgear, is one of the continent's most unique and emblematic species.

Found high in the Canadian Rockies and south through Mexico and the Baja Peninsula, these herbivores are an intriguing and beautiful species native to North America. From Native American mythology to modern day professional sports, the bighorn sheep is an important piece of the continent's natural heritage.

Impressive weaponry
Bighorn sheep differentiate themselves from other species in the Ovis family with an otherworldly set of horns worn by the males. National Geographic reported that these grow throughout an individual's life and at 30 pounds or more can weigh more than the combined weight of the rest of the animal's skeleton. In the American Southwest, desert bighorns are less stocky than their mountain cousins but exhibit many of the same behaviors.

These animals live in social groups, although rams and ewes may live separately, only coming together to mate in the fall. During this time, male bighorns will assert dominance over one another with violent displays of athleticism and fortitude. Usually the individuals with the largest horns will win, and sometimes are able to thwart competitors on looks alone. When it does come to trading blows, these animals ram each other head on. The winner usually walks away with breeding rights.

The Plexus Institute reported that despite collision speeds of north of 20 miles an hour and a combined force of over 800 lbs, bighorns rarely suffer long-term injuries during these battles. The horns are porous on the inside, and the air helps absorb and distribute the force of the impact. Similarly, the outside of the horns are made of keratin, which is elastic in nature. Because the horns are long and curled, each blow is less violent than it appears. For further protection, the animals brain is rushed with blood, preventing it from moving inside the skull during a collision. As a result, bighorns can have impressive battles without suffering long-term damage or trauma.

Relatively docile
When bighorns are not fighting one another during mating season, the animals are relatively calm. That being said, whenever hiking with your Pro Trek triple sensor watch, exhibiting caution and common sense around bighorns and other wild animals is important.

That is especially true considering that bighorns often share territories with fearsome predators like wolves, coyotes and mountain lions. The animal's horns also serve as protection against these beasts, especially in the spring when lambs are born. Although bighorns often rear their young on high, secluded mountain ledges to avoid predators, National Geographic stated that some creatures, like golden eagles for example, may still be a threat to young sheep.

After just one week the young sheep are able to join the rest of the herd. The animals then roam the mountain side for grasses and other plants. Like most hoofed mammals, bighorns regurgitate their food and chew it as cud as part of the digestion process.

Famous fauna
According to the Lewis and Clark Organization, the famous explorers were among the first Westerners to describe bighorn sheep, although previous explorers had brought back specimens to Europe a few years prior. Impressively enough, Lewis and Clark were able to distinguish bighorns from some of the other species of sheep and goat that call the Rocky Mountains home.

The National Bighorn Sheep Center reported that the animals often share their range with Dall Sheep and Mountain Goats, as well as the stone sheep, which sports its own impressive set of horns.

Let the Pro Trek PRG270B-3 guide you through the wilderness and toward the wildlife you want to see! With built-in features like barometer, altimeter, digital compass, and 100M water resistance, the PRG270B-3 is ready to handle any terrain animals may roam.