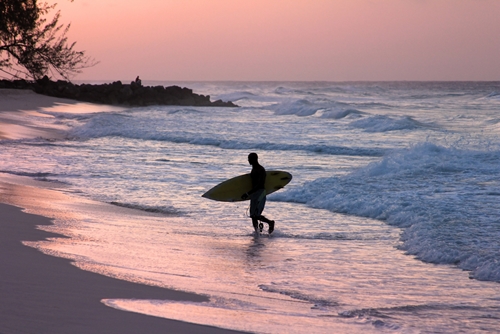 Many Hollywood films harp on the fact that sharks are among the scariest creatures found in the ocean. But any true ocean adventurer knows that while these large predators pose a threat for the unprepared, there are many other dangers that may surface during a marine adventure.

The first step to overcoming these obstacles is familiarizing yourself with what may come, then learning how to deal with dangers as they arise in the water. Before any undersea adventure, it's imperative that you research your specific region for any localized alerts, such as heightened shark activity or impending hazardous weather conditions.

As you're preparing for your ocean adventure, be sure you review the following dangers and how they may impact your journey.

1. Large waves
Regardless of whether you're kayaking, swimming or surfing, waves can pose some of the greatest dangers to those in the ocean. Not only can they bring dangerous marine life closer to shore, but they can overwhelm some swimmers and cause serious damage. Never venture farther than you're comfortable, and always let another person know when you've gone into the ocean by yourself.

2. Hidden reefs
While most reefs are visible to the eye, some shallow grounds sneak up on boaters and surfers, leading to crashes, physical injuries and equipment breakage. These cause the most problems for fishers, surfers and other adventurers who are on boats, as they can become stranded on shallow reefs.

3. Decompression sickness
This condition is limited to scuba and deep sea divers, but its among the most potentially dangerous conditions these adventurers may face. Decompression sickness occurs when underwater pressure causes the body to release excess levels of nitrogen, which eventually get released once the diver returns to the surface. Prior to going on an activity of this nature, it's imperative that divers review safety information, as decompression sickness, oxygen toxicity and barotrauma are all concerns they should learn to identify and avoid.

4. Faulty equipment
Keeping your equipment in prime condition is critical for any rigorous outdoor activity, water sports included. Having a sturdy watch compass ensures you stay your course while in the water, while a well-maintained kayak prevents your goods from spilling. Your outdoor gear can also prevent you from sustaining serious injuries, particularly if you're using equipment that is frequently replaced or carefully assessed before each use.

5. Rip currents
According to the National Oceanic and Atmospheric Administration, rip currents account for 80 percent of rescues performed by lifeguards at the beach. These are similar to waves, but can be much more powerful and threatening for people in the ocean. Rip currents can pull swimmers underneath the surface and drag them into deep waters or prevent them from coming back up.

6. Sudden weather shifts
Another pressing concern for people participating in water sports at the beach is weather shifts. Hurricanes and tropical storms can generally be predicted a few days in advance, but lightning, thunder storms and tsunamis can occur with little warning, so it's important adventurers stay close to radios and heed any warnings as soon as they occur.

7. Health conditions
If you're participating in an activity that takes you out to sea - like fishing, surfing or water skiing - assess your physical health first. If you've got a chronic condition, such as asthma, you'll need to bring along medication.

It's also best practice to bring along an emergency first-aid kit equipped with bandages, antibiotic ointment, gauze and a radio to ensure any injury that happens during your activity can be addressed until you get medical attention.

Conquer your fears with a PRW3000-2B ProTreck watch. It comes complete with barometer, altimeter and compass so you'll never get lost at sea. Did we mention it's also 100M water resistant? So taking it out into the deep blue won't stop it from ticking.