The mystery and beauty of Bryce Canyon, Utah 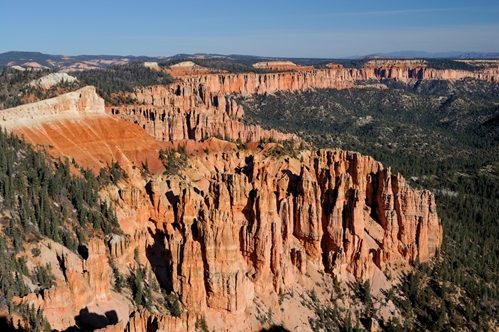 Utah is one of the less populous states in the U.S., to be sure, and some may extrapolate that this makes the state boring or otherwise lacking in attributes that make it worth visiting. But within its borders lie more than a few landmarks and natural wonders that have enough natural beauty about themselves to - momentarily - take your breath away. More than a few of these can be found in one particular space - within the borders of Bryce Canyon National Park.

Located just under 270 miles south of Salt Lake City, in a journey that's practically a straight shot down I-15 South past the city of Provo and the Fishlake National Forest, this renowned preserve is home to natural attractions that make it a truly one-of-a-kind location. As the U.S. National Park Service states on the park's official website, "There is no place like Bryce Canyon." Any lover of the great outdoors is going to find much to love about Bryce Canyon, but it will, without a doubt, be particularly thrilling to hikers wishing to clamber over its impressive stone edifices. If this describes you, you're in for a treat - and you'll be putting the digital compass on your PRW3100Y-3 to good use!

Today, we'll take an in-depth look at the features that make this protected park so appealing:

Hoodoos and amphitheaters: Primary geological curiosities of Bryce Canyon
In Creedence Clearwater Revival's 1969 Southern rock anthem "Born on the Bayou," lead vocalist John Fogerty sings of how he "can still hear my ol' hound dog barkin', chasin' down a hoodoo there." That lyric references the melange of Creole, Cajun, Haitian and African cultures that form much of Louisiana's folklore, specifically a sorcerer working within those traditions. In Bryce Canyon, however, hoodoos are considerably less occult.

Here, the term refers to giant formations of rock emerging from the basins at the lowest point of the park, protruding up into the air like colossal, naturally occurring totem poles. Once, they were part of the canyon's various plateaus, particularly the red-hued Claron Formation, which dates back tens of millions of years. However, many millennia of frost and thawing cycles have eroded quite a few of these plateaus, carving out spaces that are now mostly empty - except for where the enigmatic hoodoos have been left in the erosion's wake. Thor's Hammer, Queen Victoria, the Three Wisemen and The Rabbit are among the most famous of these rock spires, but there are dozens and dozens of them scattered throughout the park.

Some may find the Bryce Amphitheater to be an even more visually compelling attraction than the hoodoos. Named quite aptly for the open-air concert venue it most closely resembles, this feature of the national park, which stretches approximately two miles across, stands out as yet another testament to the slow and steady force of erosion. In this case, the natural process has hollowed out a curved basin of beautifully multicolored rock. The specific age of the Amphitheater is not known, as estimates range between 130 and 40 million years old. You're likely to get your best look at this landmark at sunrise or sunset, so plan accordingly!

Flora and fauna
Bryce Canyon is home to an arid, desert-like climate - albeit with much more vegetation than you'd see across a truly austere desert such as the Mojave - and thus features many of the same kind of plants and animals that many deserts contain. Most of the trees found in the national park are in the evergreen family: Multiple spruces and pines, Douglas firs, Rocky Mountain juniper and Colorado pinyon trees can all be seen. As for smaller plants, greenleaf manzanita shrubs cover much of the ground, complementing striking flowers like the Bryce Canyon paintbrush and many-flowered stoneseed. Be careful, though - some Bryce flowers, like the mountain death-camas, are extremely poisonous!

Only one of the animals that makes its home in Bryce Canyon National Park - the Great Basin rattlesnake - is venomous, but they generally only attack when antagonized (unlike certain cobras and mambas that are naturally aggressive). So if you see one, move away slowly and you'll probably be fine. As for the rest of the fauna, mountain lions may strike if they perceive a threat but generally steer clear of humans. The rest of the park's animals are far more cute: Prairie dogs, chipmunks, golden-mantled ground squirrels and pronghorn antelope all live here.

Finally, if you like to do some bird-watching alongside your hiking, you're also in luck: Bryce Canyon is home to 210 known bird species.

Trails for hikers at the beginning and expert levels
Passionate hikers are likely going to be most interested in the numerous trails that NPS personnel have designated throughout Bryce Canyon. These range in distance from barely a mile back and forth to approximately 9 miles round-trip, and their difficulty generally corresponds with their length. That being said, many of the park's most striking sights can be best observed from the roughest trails. Some of these include:

Peek-A-Boo Loop Trail
This stretch begins at Bryce Point and continues for 2.25 miles (5 round trip), passing through the most truly astonishing portions of Bryce Amphitheater. Sunscreen and proper hiking boots should be used, and due to sudden, jarring changes in elevation, you should strongly consider packing a watch altimeter.

Fairyland Loop
Much longer than Peek-A-Boo Loop (8 miles both ways) but arguably even more beautiful, the Fairyland trail features multiple hoodoos and has several paths extending off of it like tributaries from a river, including one that leads to Tower Bridge. Be cautious, as this is one of the trails where snakes are commonly seen.

Hat Shop
This one involves a fairly steep descent and isn't a loop, and thus requires a tough hike back up to the top. But if you do check it out, you'll see hoodoos that appear to have rock-formed hats atop them - hence the trail's name.

Swamp Canyon Trail
Connected to the more easy Under the Rim Trail, the Swamp Canyon path takes hikers through rugged terrain with patchy bursts of plant growth, but it isn't nearly as hard to traverse as Fairyland or Peek-A-Boo. It earns its name due to the fact that it covers some of the deepest parts of Bryce Canyon.

No matter which trail (or trails) you end up hiking, be sure to bring a healthy supply of water. Dehydration in this climate is a recipe for disaster.

Other ways to explore the preserve
The options for activities in Bryce Canyon National Park certainly don't stop there. Horseback riding is an extremely popular choice during the summer, though you can't experience quite as many of the trails, out of concern for the horses' safety. The NPS rangers who watch over the park also conduct a number of guided activities, which vary slightly with the seasons.

No matter the time of year, moonlit hikes are an option - once every month over the course of the two nights the moon is at its fullest. They range between 1 and 2 miles. During the summer, you can take part in more specialized astronomy activities, getting the full measure of the stars over Bryce Canyon.

If you're interested in a multi-day hiking expedition, consider taking advantage of Bryce Canyon's two campgrounds, one of which is open year-round. During the summer, you can book rooms at the Bryce Canyon Lodge, but you'll have to stay at the nearby Sunset Hotel during other seasons.