The one place on earth to see lions, tigers and bears in the wild 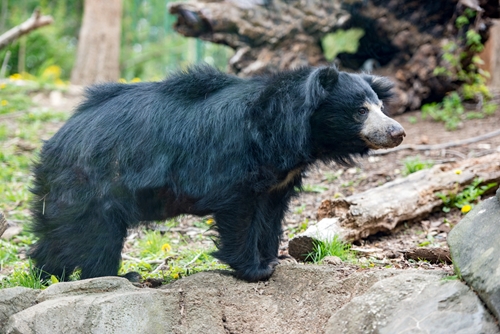 In Victor Fleming's 1939 classic "The Wizard of Oz," Dorothy, the Tin Man and Scarecrow discuss the possibility of running into wild animals on their quest, and in particular, lions, tigers and bears. Yet outside of Oz, there is only one place on earth where this could possibly happen. Home to hundreds of exotic and intriguing creatures, India holds the distinct honor of being the only location in the world where wild lions, tigers and bears all live.

Although the animals are spread across different wildlife sanctuaries, a proposed conservation project could soon see these three predators living together for the first time in hundreds of years

Asiatic lions
The king of the jungle once enjoyed a much larger range than it does today. Just a few thousand years ago, lions could be found from the tip of South Africa all the way north to Eastern Europe and across the Middle East and into India. Today, however, lions are primarily found in sub-Saharan Africa. According to PBS, a small population of Asiatic lions still survives in Gir Forest National Park in northern India. These predators are smaller than their African cousins but are still formidable beasts.

Thanks to conservation efforts over the decades, a few hundred individuals comprise a stable and growing group of these animals. PBS reported that a compensation program with nearby ranchers has helped limit conflict between humans and lions, as the animals have begun to expand beyond the protection of the park. The predators usually subsist on gazelle, antelope, deer and wild boar, although livestock is still at risk.

Sloth bears
While lions are largely absent outside of Africa, the continent is entirely devoid of bears. These charismatic creatures are, however, quite successful throughout the rest of the world. In India, three species are present - the Himalayan black bear, the brown bear and the sloth bear.

The sloth bear is most recognizable by it's shaggy, unkempt coat, and it too can be found in Gir Forest National Park and across India. As National Geographic reported, the bears primarily feed on insects like ants and termites, which means it usually doesn't compete with the lions for food.

In fact, there are many other predatory animals living in the park. Leopards, jungle cats, jackals, hyenas and honey badgers may all be spotted when you grab your Pro Trek PRG600Y-1 Triple Sensor watch and head to Gir Forest. Tigers, however, are not on the list.

Bengal tigers
Perhaps the most emblematic species in all of India, tigers have long been absent from Gir Forest National Park. Across the world these creatures are facing the threat of extinction, but fortunately recent reports have shown encouraging trends. According to the World Wildlife Fund, the population of tigers in India is growing, and there are more individuals living in the country than anywhere else in the world.

Still, like the lion, the current range of wild tigers is much lower than it was just a few centuries ago, although there are still many places to see these animals in the wild during a trip to India.

Lions, tigers and bears together
According to Cambridge University, the three famous predators may soon be re-uinited. Because the Gir Forest population of Asiatic lions has been so stable, there have been proposals to move some of the animals into new protected spaces. Two prides may soon be relocated to Palpur-Kuno Wildlife Sanctuary, which is also in northern India. Already home to tigers and sloth bears, this project would represent the first time in centuries that lions, tigers and bears all lived side-by-side.