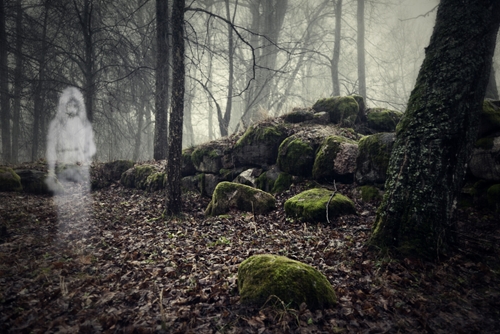 Whether or not you believe in the paranormal, there are a few spots on the map that will leave even the most stoic visitors a little rattled. Haunted houses get the most press when it comes to ghost sightings, but there are several outdoor locations that receive their fair share of visits from the beyond.

Ahead of your trip, be sure to grab your Pro Trek watch compass, because the last thing you want is to get lost at one of these spooky destinations.

Gettysburg Battlefield: Gettysburg, Pennsylvania
Once the scene of one of the Civil War's most famous battles, Ghosts of Gettysburg reported that the woods and fields surrounding the area are home to numerous supernatural sightings and encounters.

Visitors to Gettysburg may find themselves facing the spirits of fallen soldiers, moving across the field in traditional combat lines. Other apparitions such as wartime patients and wandering prisoners are said to haunt the battlefield and beyond.

Point Sur Lighthouse: Carmel, California
According to the Travel Channel, Pfeiffer Big Sur State Park is home to the Point Sur lighthouse, the site of many shipwrecks. As a result, spirits of the dearly departed are said to haunt the lighthouse and surrounding area.

One famous ghost is that of a tall man in a dark blue coat, who is said to be the former lighthouse keeper. He now allegedly wanders the structure. For the bravest visitors, guided midnight tours are available in October, however sightings of the old man and other ghosts are said to happen year round.

Bachelor's Grove Cemetery: Bremen Township, Illinois
Prairie Ghosts reported that Bachelor's Grove Cemetery, located just a short way from Chicago, is one of the most haunted areas in all of the Midwest. Found in the Rubio Woods Forest Preserve, the old cemetery is the site of more than 100 reported sightings. These include glowing lights and phantom cars.

In its heyday, Bachelor's Grove was a popular destination for outdoor activities among families in the Chicago suburbs. Over the years, however, the site fell into decay. As the number of visitors declined, Prairie Ghosts stated that caretakers began seeing signs of vandalism and even acts of pagan rituals and animal sacrifice, which some say may be why spirits and other forces began to present themselves.

Tenaya Canyon: Yosemite, California
Apparently paranormal activity is rampant even within one of America's most famous national parks, and the father of American conservation, John Muir, experienced this first hand, according to the Gear Caster.

Cal Tech reported that Chief Tenaya cursed the land after his son was killed during a raid by white settlers in the 1850's. Ever since visitors have witnessed strange accidents or even mysterious deaths.

In 1918, Muir wrote about his own encounter with the curse, which he attributes to his first ever fall while exploring the region. To this day, park officials warn of the ``Bermuda Triangle of Yosemite," Cal Tech stated.

Doll Island: Xochimilco, Mexico
Known as the Isla de las Muñecas, this site exploits some deep-seated fears in many visitors. According to the area's website, this forest, located just south of Mexico City, was once the site of a horrific death. Legend has it that a young girl drowned under "mysterious circumstances" and her soul now wanders the forest.

The caretaker of the island at the time found the poor child's body, and as a sign of respect, hung up her doll in a tree. The girl's soul began to haunt the lonely caretaker, prompting him to hang more and more dolls up around the island. Supposedly, after years of hanging dolls, the caretaker was found drowned in the same spot as the little girl. Now, he and other spirits wander the island, while the lifeless dolls are said to whisper to one another. Rest assured, this spot is not a destination for the faint of heart.

Even the bravest of individuals can become lost. Prevent the nightmare of a dead battery by packing the ProTrek PRW3000-2 loaded with built-in compass, barometer, thermometer, and a solar rechargeable battery perfect for whatever dark and haunted destination you choose!