What you need to know about bobcats 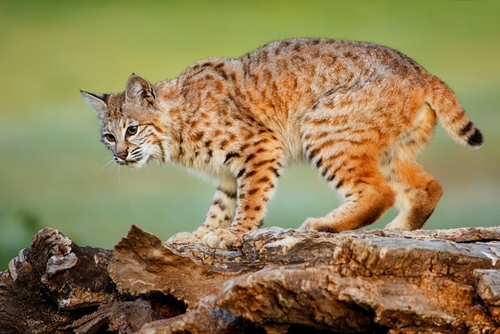 A female bobcat named Ollie made headlines in early 2017 after she escaped from the National Zoo, only to return a few days later. In that time, the animal made headlines around the country and forced Washington D.C. schools to cancel outdoor recess.

Though Ollie is safe and sound, her escapade has brought her species into the limelight. Where do bobcats usually live? Are they really a threat to  children? Use this guide to learn a little bit more about these predators:

Are bobcats dangerous?
Weighing no more than 30 pounds, bobcats certainly aren't the largest animals you might encounter during an outdoor adventure. National Geographic reported that these cats usually prey on small mammals like rabbits and hares, although they can be opportunistic predators. As such, a bobcat can feed on insects as well as substantially larger animals like geese or even young deer.

Despite being such prolific hunters, bobcats are rarely a threat to humans. These cats are generally fearful of people. Regardless, you should always give any wild animal plenty of respect and keep your distance. Like coyotes, however, bobcats may pose a threat to pets. If an animal is being unusually adventurous, it could be rabid and needs to be avoided at all costs.

What's the difference between a bobcat and a lynx?
Bobcats are easily identifiable because they have round, flat faces, a solid build and short little tails. This can be confusing, however, because this description also suits the lynx.

In reality, the bobcat is considered a distinct member of the Lynx family. Close relatives of both the mountain lion and the domestic cat, the Lynx genus became a distinct group roughly 3.24 million years ago. Today, the Canadian lynx and the bobcat both call North America home, while the Eurasian lynx and Iberian lynx stalk the wilds of Europe, Asia and the Middle East.

A bobcat can be identified by its red or brown spotted fur and usually has short ears and a stocky frame. Gray or silver fur, long legs and rounder face, meanwhile, are all characteristic of a lynx. Neither animal is much larger than a small dog, but both species are exceptionally athletic hunters. Bobcats can jump 10 feet or further to capture prey, displaying the same unbelievable acrobatics as your pet cat.

Where do bobcats live?
The bobcat not only has the greatest range of any North American cat but is also the most abundant wild feline in the entire U.S. These animals can be found from New England to California and from the Canadian Rockies south into the deserts of Mexico. There may be one million individual bobcats in U.S. alone.

The cats can live in a diverse array of habitats, from alpine areas and dry deserts to verdant forests marshes or along the coast. This versatility has helped bobcats thrive amid urban areas, especially where rodents and small birds thrive. Like other city-dwelling animals they may rely on parks and green spaces but can also survive amid housing and more developed places.

Just because they are so ubiquitous doesn't mean you're likely to spot a bobcat the next time you grab your Pro Trek PRG300-4 triple sensor watch and head out for a hike. Nocturnal hunters that  quietly stalk prey, the predators are masters of stealth. Bobcats may be active during the day, but usually around dusk or dawn.

Although Ollie's escape was an exciting one, she is safe at home at the National Zoo. Your safest and most likely place to spot Ollie and any other of these elusive hunters remains in captivity at a local zoo or wildlife rescue.