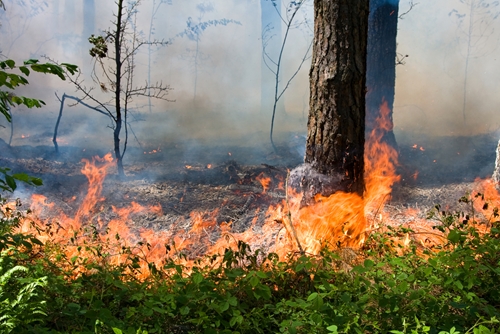 Most Americans are probably familiar with the importance of preventing forest fires. After all, they can be destructive or even deadly events that threaten entire ecosystems as well as human settlements. In recent years, however, new research has shown that in some instances, a lack of fire can also be dangerous to the forest, NASA reported.

It's important to note that although fire may promote sustainable growth in a given plot of woods, exercising extreme caution when camping or hiking is still important. Be sure to follow all posted guidelines regarding campfires, and use your Pro Trek watch barometer to monitor dangerously dry conditions.

"Only You Can Prevent Wildfires"
According to the U.S. Forest Service, Smokey the Bear was born in 1944 in an effort to promote education surrounding the dangers of human-caused wildfires. Since then, his image and message have become incredibly famous.

At the time, many areas in the U.S. - particularly on the East coast - were being used for farming or had been cleared for timber. Because forests are important for preventing things like landslides and fires, these disasters were increasingly common. Unfortunately, many of the most able bodied men were serving in the military during the first half of the 20th century, and firefighters were in short supply. The Western part of the nation, which is generally drier and more susceptible to forest fires, suffered from the same lack of man-power. It was in this context that a need for fire prevention education was born.

Changing needs
Around the time that Smokey the Bear began spreading his message of fire safety, the greenery on the East coast were beginning to grow back. This gave scientists a unique opportunity to observe forests reaching maturity.

According to the California government, one of the thing researchers found was that the specific ecology of a forest actually needs fire to reach natural levels of biodiversity. Because the plants and animals evolved with fires as part of the usual ebb and flow of daily life, there are certain services that these events serve. With stringent fire prevention, the growing forests in the East as well as the older areas in the West have been denied an important resource.

The benefits of fire
New research has found that fire is actually essential for a happy, sustainable growth. As a result, NASA stated that some states are experimenting with prescribed burns in certain areas.

Ash is incredibly fertile, and without occasional fires, the soil in a forest or prairie can become too basic or depleted of nutrients. Fire burns dead trees and converts them into fresh soil, promoting new growth. Likewise, more trees are killed by insects than by fires in a given year, and naturally occurring blazes are a pest remedy for a forest.

Likewise, some brush species can become overgrown without semi-regular fires. The California Government reported that historically forested areas had fewer, healthier trees, but without occasional wildfires, understory growth has been disproportionately competitive, making it harder for hardwoods to reach their full potential. The removal of over-grown shrubs or bushes also decreases competition for water supplies, which results in healthier streams, as well as the return of wild flowers and grasses on the forest floor.

Some species, like Oak, have evolved to be especially resistant to fire, and this trait has historically been a key evolutionary strategy. For other types of trees, fire stimulates seed germination. Without semi-regular blazes, these species are at a new competitive disadvantage.

Preventing wildfires is still an incredibly important part of spending time outdoors, and the message of responsibility when visiting a forest or other green space is just as applicable today. For the U.S. Forest Service and other agencies, however, learning how to properly use fire to promote sustainability is also critical.

Stay safe and sound anytime you are enjoying Mother Nature by utilizing the Pro Trek PRW3500Y-4. With built-in barometer the PRW3500Y-4 can predict changing weather patterns and alert you of any approaching and troubling conditions.